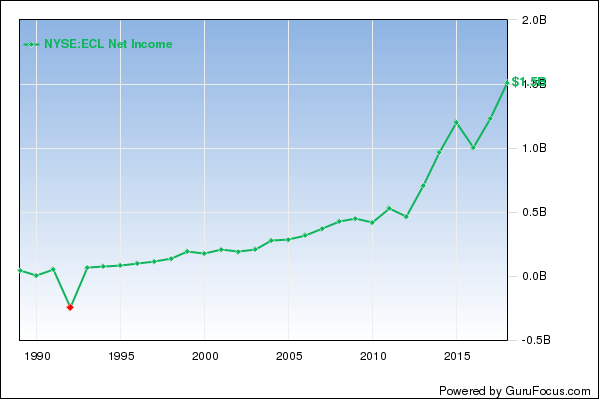 Bill Gates, one of the world’s richest people, increased his position in Ecolab Inc. by 1.33 million shares from March 7 to March 9, according to an insider filing.

The stake makes Gates the largest shareholder of Ecolab, followed by the Vanguard Group and BlackRock Inc. (Sift through filings related to Gates’ position in Ecolab using the FilingWiz here.)

Based in Kirkland, Washington, Cascade Investment is owned by Bill Gates and managed by Michael Larson, who also sits on the board of Ecolab. It does not publicly report positions unless they exceed more than 5% of a company. Some of their other investments include a 20.2% stake in Autonation and 9.9% position in Deere & Co.

Back in 2012, Ecolab and Gates agreed that Cascade Investment and the Bill & Melinda Gates foundation would be allowed to acquire as much as 25% of the company’s outstanding shares. If their combined positions ever totaled more than 15%, they also agreed not to seek control of the company. 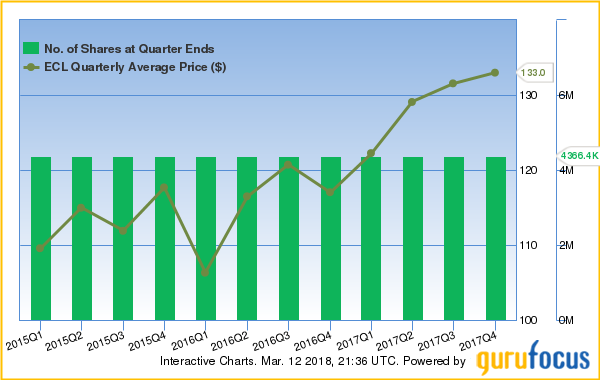 With a $39.46 billion market cap, Ecolab focuses on water, hygiene and energy technologies aimed to reduce infections, improve food safety and provide other benefits to businesses.

The company has been highly profitable. Over the past 10 years, it has produced steady net income, which reached a record high of $1.51 billion in 2017.

Ecolab’s balance sheet at first glance may give cause for concern. It has only $211 million in cash next to $6.76 billion in long-term debt. Some of the debt has gone toward repurchasing shares. In 2017, it bought back $600 million in shares while taking out $467 million in debt.

But the company seems to have a good debt situation. Its interest expense stood at only $275 million in 2017, which was amply covered by its $2.02 billion in operating income that year. The debt has been relatively cheap to finance, with a 4.49% effective interest rate.

Ecolab also has relatively cheap valuation ratios. At 26.25, its price-earnings ratio is near a five-year low. Its price-book ratio at 5.12 is near a two-year low. The price-sales ratio, however, has soared to a 10-year high of 2.87.

The fourth quarter continued to show improvement, with all segments reporting sales growth.

“Pricing exceeded delivered product costs and contributed to the operating income improvement. These were accomplished at the same time we improved our cost efficiency and made key investments to further our growth and industry leadership,” the company’s chairman and CEO, Douglas Baker Jr., said.